History of the Eisteddfod

After the Second World War, the Longwell Green community decided that they needed to re-create the pre-war community spirit. So, after fund raising, various activities were arranged.

In 1947, Mrs Kath Hook and some of her friends organised and ran an Eisteddfod. It was based on the traditional Welsh Eisteddfod but it was to be a one day only event. In this instance it was held on Sunday and local people were invited to a day of music, singing, dance, speech and drama. It was held in a nearby temporary hut. This was to be the start of the Longwell Green Eisteddfod.

It proved a success and continued to grow until 1975 when Kath decided that a committee was needed to run the ever-growing numbers of competitors entering the Eisteddfod. Four secretaries were appointed and each one was invited to be responsible for one area of activity. At the same time, a treasurer was appointed to manage the financial affairs.

Since that time, the population of Longwell Green has increased significantly. The Eisteddfod has followed this growth trend and in 2018 classes ran for a full week, at times needing to use two rooms in the Community Centre.

2019 saw the merger between Longwell Green Eisteddfod and Kingswood Eisteddfod.

Our thanks go to Margaret Molton for contributing this history.

A Brief History of Kingswood Eisteddfod

Kingswood Eisteddfod started in 1943 and took place in various Halls in Kingswood and nearby Staple Hill. In the 1963 programme that we have in our archives, it shows that the Vocal section was the largest section taking 6 days ( 2 adjudicators on each day), followed by Music (Piano and Instrumental) taking 4 days, then Dance for 2 days and Speech and Drama for 1 day. The days were long in most sections as they ran from 9.00 in the morning until 9.00 at night. Over the years Dance increased and became the largest section.

Unfortunately over the last 5 years, due to lack of volunteers we were unable to find people to run  the Vocal and Music sections. We carried on with the Dance and Speech and Drama sections for 3 years, then due to a problem with our venue we were unable to hold either section any more. After several weeks trying to find another suitable venue, we took the decision to disband and fortunately we have now been able to amalgamate with Longwell Green Eisteddfod, and become the Longwell Green and Kingswood Performing Arts Festival, so both names are still there.

Our thanks go to Rosemary Powell for contributing this history.

Cover of the Kingswood Eisteddfod programme of 1963. 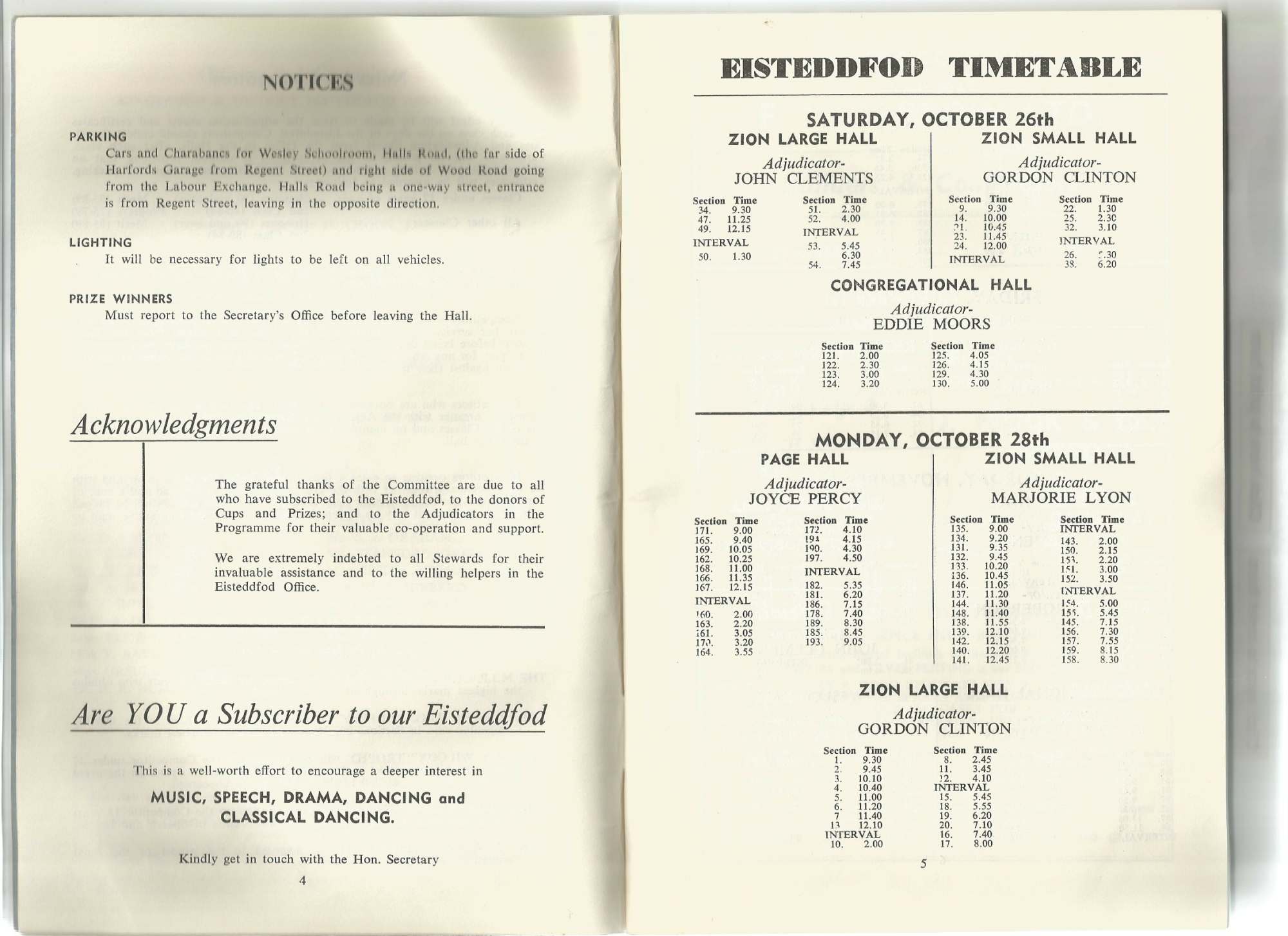 Inside of the 1963 Kingswood and District Eisteddfod programme.

PostPress, a WordPress Theme by @aicragellebasi

We use cookies on our website to give you the most relevant experience by remembering your preferences and repeat visits. By clicking “Accept All”, you consent to the use of ALL the cookies. However, you may visit "Cookie Settings" to provide a controlled consent.
Cookie SettingsAccept All
Manage consent

This website uses cookies to improve your experience while you navigate through the website. Out of these, the cookies that are categorized as necessary are stored on your browser as they are essential for the working of basic functionalities of the website. We also use third-party cookies that help us analyze and understand how you use this website. These cookies will be stored in your browser only with your consent. You also have the option to opt-out of these cookies. But opting out of some of these cookies may affect your browsing experience.
Necessary Always Enabled
Necessary cookies are absolutely essential for the website to function properly. These cookies ensure basic functionalities and security features of the website, anonymously.
Functional
Functional cookies help to perform certain functionalities like sharing the content of the website on social media platforms, collect feedbacks, and other third-party features.
Performance
Performance cookies are used to understand and analyze the key performance indexes of the website which helps in delivering a better user experience for the visitors.
Analytics
Analytical cookies are used to understand how visitors interact with the website. These cookies help provide information on metrics the number of visitors, bounce rate, traffic source, etc.
Advertisement
Advertisement cookies are used to provide visitors with relevant ads and marketing campaigns. These cookies track visitors across websites and collect information to provide customized ads.
Others
Other uncategorized cookies are those that are being analyzed and have not been classified into a category as yet.
SAVE & ACCEPT